Here’s the thing about trauma that not many people recognize, let alone understand: it can be passed down through the generations.

That’s right… you might be dealing with trauma from events that you never even experienced directly. And, if you don’t heal it, the cycle will likely continue with your children – if it hasn’t already.

That’s why it’s so critical to understand generational trauma, recognize how it is showing up in your life, and take the steps to heal it.

But it’s not easy and there aren’t any shortcuts. It’s going to take time, commitment, energy, and a lot of hard work. And, let’s be honest… there’s no way on Earth that I’ll ever be able to write an article that will tell you everything you need to know to do it. But my intention is to at least get you going in the right direction. So that’s why we’re both here right now.

In the article below, I will explain to you what generational trauma is, how it can present itself so you can recognize it, and go over some of the things you need to do to heal it so that the cycle finally ends. Ready?

Pain from the Past: How to Recognize and Heal Generational Trauma 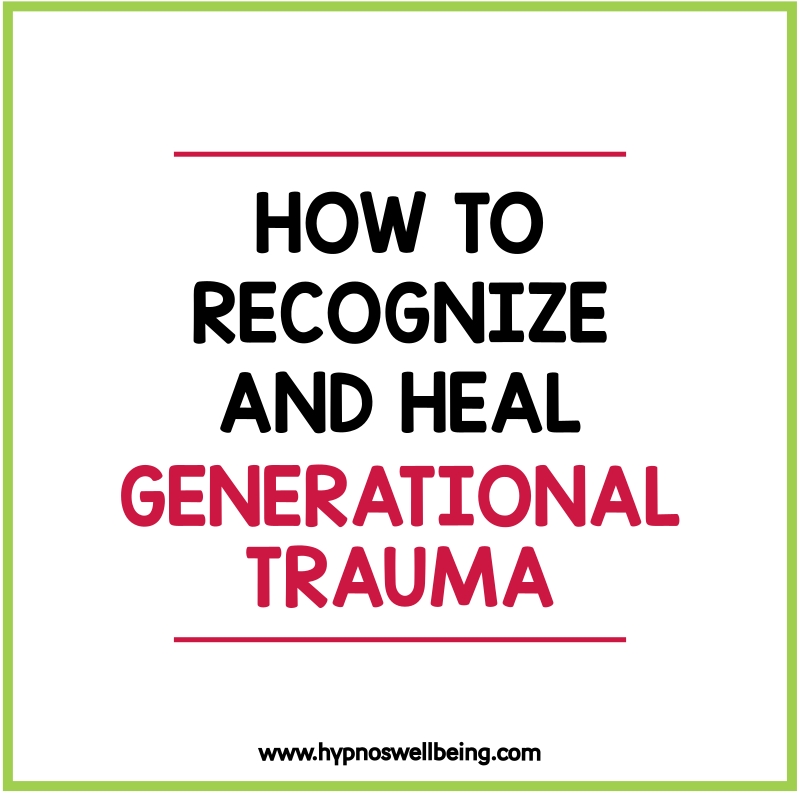 What is generational trauma?

Generational trauma is trauma that extends beyond the people who directly experienced it to negatively impact their children, grandchildren, and other future generations. This isn’t just some “woo woo” concept – it’s been backed up by science on several occasions.

A 1988 study published in the Canadian Journal of Psychiatry revealed that the GRANDCHILDREN of Holocaust survivors were still reporting high levels of anxiety, depression, and PTSD… two full generations after the traumatic events occurred.

A 2017 study revealed that Finnish women who had been separated from their parents during World War II experienced higher rates of psychiatric hospitalization.

A 2018 National Academy of Scientists study looked at the sons of Union Army – both those who had been prisoners of war (POWs) and those who fought in the Civil War but were never imprisoned.  They found that the sons of POWs soldiers had a much higher chance of dying prematurely than their counterparts.

A 2013 study at Emory University was even able to illustrate generational trauma in animals by proving that mice can inherit fear of certain smells from their parents and grandparents – even when they’ve never experienced the negative outcome themselves.

Now, you may think that perhaps the trauma comes from something in their environment. Perhaps their parents told them stories that impacted their stress levels. Or maybe they were conditioned to avoid certain things. While it is definitely true that we can adopt and internalize various mindsets and behaviors from our parents, scientists have discovered that it’s deeper than that. In fact, it’s genetic!  Epigenetic, to be more specific. Epigeneticists have discovered that experiencing trauma during one’s lifetime can change the way DNA is read or expressed… and that change can be passed on to the next generation.

Who is affected by generational trauma?

While no one is immune to it, generational trauma is more likely in certain populations. At the top of the list are people and communities of people who are systematically oppressed or exploited, those who are at the receiving end of chronic abuse, those who endure racism, and those who live in chronic poverty. Other traumatic events that can trigger generational trauma include (but are not limited to) war, natural disasters (like hurricanes, tsunamis, landslides, earthquakes, etc), sexual abuse/assault, domestic violence, and hate crimes.

Looking at this, it’s easy to see how prevalent generational trauma can be. In fact, considering the events of 2020 (police brutality and widespread racial unrest in the U.S., wars across the planet, devastating fires in Australia and California, devastating earthquakes in Puerto Rico, locust swarms across Africa and Asia,  and (of course) the global COVID-19 pandemic and all of its health, social, and financial consequences), it’s something we NEED to consider for future generations.

The list of symptoms related to generational trauma is a long one… and since the concept is still fairly new, I’m sure we have a long way to go before we’ve identified all of them. However, here are some of the common symptoms:

How do you heal generational trauma?

While there’s no cure or official treatment for generational trauma, here are some things that can help:

Reflect on your ancestry

Sit down and really reflect on the generations that came before you – not just the people who have passed on, but the ones who are still alive. Think about their accomplishments, but pay close attention to their hardships. If you want to dig even deeper into this, make a family tree so you can really dig into your roots.

A very important part of the healing process is to recognize and acknowledge the symptoms that reveal that there’s healing that needs to be done. After all, until you realize that there’s a problem, there’s no motivation to change things. Reflect on the things about your personality, your behavior, your health, and your life that may be due to ancestral trauma – especially the symptoms listed above.

Another important thing is that when you realize that you’re repeating a negative cycle from generations past, to do whatever you can to put an end to it. Not only will this benefit you, but it will benefit your children, grandchildren, great-grandchildren, etc. Strip these cycles of their power to impact future generations

The next step is to commit to healing. This may seem like an obvious thing, but the truth is that healing is hard, uncomfortable, and often scary. And when things are hard, uncomfortable, and scary, it can be ridiculously easy to retreat into the relative comfort and familiarity of the things you’re used to… even if you know they’re not good for you. So take some time to actively commit to seeing your healing through, no matter how hard it is.

One thing you can do to help you stay committed is to write down a story about how your life will be once you’ve done your healing. Get as descriptive as possible – to the point where you can see, hear, and even feel everything as though it were real. Keep this somewhere you can easily access it so that when you start feeling overwhelmed by the healing process or want to give up, you can remind yourself of the future that is at stake. You can make your reason even more poignant by also writing down how it will be for your children, grandchildren, etc if you DON’T heal the trauma that you’re living with.

I think people fail to realize just how powerful forgiveness can be. Not only forgiving the generations before you, but forgiving the people who have negatively impacted you throughout your life… and yourself. When you forgive the people that have impacted you negatively, you are that much closer to being able to let go of the things that trigger you negatively. Which means you’re that much closer to true healing, peace, and growth.

Of course, I couldn’t talk about healing trauma without mentioning therapy/counseling. Whether you go for the more traditional forms of “talk therapy” or opt for methods such as hypnotherapy, it can be highly beneficial to have a help professional guide and support you as you work through the process of uncovering, healing, and recovering from generational trauma.

Another method that I think merits mention is shadow work. Introduced by renowned psychologist, Carl Jung, shadow work is all about acknowledging and accepting the hidden, less appealing parts of our personality. The parts that might make us feel ashamed or fearful about how people would see us if they knew about them. He believed that until we shine a light on the darker parts of ourselves, we will never be fully whole. Undergoing shadow work can help you to not only understand yourself better, it can also help you put an end to destructive behaviors, improve your happiness and relationships, and also understand others better.

The process of doing shadow work would require an article of its own, but one thing you can do to jumpstart the process is to first express gratitude for yourself, who you are, what you have achieved, and the fact that you don’t have to be perfect (none of us do).

Then sit down and think about your emotional triggers and how you respond to each one. Your emotional triggers are things, events, places, or people that make you have an emotional reaction. Any kind of emotion – positive or negative. During the entire process, commit to brutal honesty. Anything less and you’re sabotaging your work. Doing this will help you to identify themes and patterns.

As you’re working through these things, keep a shadow work journal where you write down any and all thoughts that come to you. Shadow work can also pair beautifully with various modes of therapy, as mentioned above.

I hope that this article has helped you to understand a bit more about generational trauma, uncover whether you’re living with it, and start the process of healing generational trauma. Have any questions to ask or insight to share? Let us know in the comments below!

This website uses cookies to improve your experience while you navigate through the website. Out of these, the cookies that are categorized as necessary are stored on your browser as they are essential for the working of basic functionalities of the website. We also use third-party cookies that help us analyze and understand how you use this website. These cookies will be stored in your browser only with your consent. You also have the option to opt-out of these cookies. But opting out of some of these cookies may affect your browsing experience.
Necessary Always Enabled

Any cookies that may not be particularly necessary for the website to function and is used specifically to collect user personal data via analytics, ads, other embedded contents are termed as non-necessary cookies. It is mandatory to procure user consent prior to running these cookies on your website.